The words dabar, logos, and rhema are three words in the Bible that were translated into our English language as “word“.  In this lesson we will be taking a closer look at the Oneness of God. 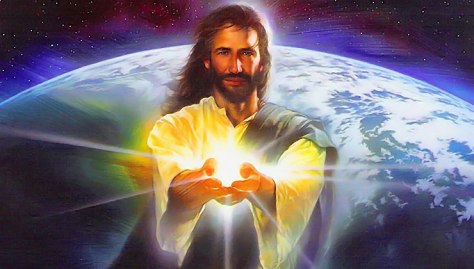 The Spirit of God is eternal as God. “God is a Spirit: and they that worship him must worship him in spirit and in truth.” (John 4:24) God is not three separate persons or individuals of one substance. Just God is a Spirit and He is eternal. That which God has created as beings are His sons and thus making our one God Father by title. Not three separate persons or individuals of one substance. God is a Spirit. God has been known as several names throughout scriptures. However, He is still one God. When we call God our Father it is because we are his offspring or children because He created mankind. Thus our God that is a Spirit became a Father to us, His creation. As we study the Old Testament we find that God spoke this world, as well as the universe, into existence. This was done by His own desire for His own purpose. “Remember the former things of old: for I am God, and there is none else; I am God, and there is none like me, Declaring the end from the beginning, and from ancient times the things that are not yet done, saying, My counsel shall stand, and I will do all my pleasure:” (Isaiah 46:9-10)

The Old Testament word for this was dabar. “[By the word – Dabar] of the LORD were the heavens made; and all the host of them by the breath of his mouth.” (Psalms 33:6) Any time you see the word LORD in caps in the Old Testament it is because the translation of the Bible into English is following after Jewish tradition and is meant for the reader to substitute the name of God here. The name Jehovah and other variations are used for this because our God’s name is YHWH or YHVH. This term is known as the tetragrammaton. Since the Jewish alphabet didn’t have any vowels in it and the Jews were afraid to speak God’s name because the commandment says not to take the LORD’S name in vain the pronunciation was lost. (See Exodus 20:7, Deuteronmy 5:11) So it has been long forgotten. The tetragrammaton without having vowels and no longer being spoken by the children of Israel caused a loss of the correct pronunciation because no one knows how it was spoken at that time. The Jewish scribes through tradition began to substitute the word Adonai, which means lord, instead of speaking the name of God in the scriptures. In Hebrew vowel sounds were used but not written so people began to try to preserve the Hebrew language after Jesus was crucified because the children of Israel began to be scattered from their promised land and knew their language would be lost forever. So they made vowel points to try to preserve the language. This they successfully accomplished. But the name of God only being letters and not pronounced was lost and since they did not ever want to take God’s name in vain they instead used the vowel points from Adonai as the vowel points we use in our English YHWH or YHVH. This then gives basically infinite ways to pronounce our God’s name with Jehovah being the most common for us using the King James Version of the Bible. Also you will notice our name for God starts with the letter J. This in itself is another complication but suffice to say that during translations to our Old English the letter I eventually was replaced in many words with the letter J of which was a new letter in our alphabet.

But back to the main topic. The Old Testament word for God speaking the world, as well as the universe, into existence was Dabar in Hebrew but Logos in the New Testament because the New Testament was written in Greek. (Side note: not every translated English “word” out of the Bible will be Dabar or Logos. It depends on the subject. In some cases in the New Testament you will see the word translated as Rhema because it is speaking in the past tense. Example: “Through faith we understand that the worlds were framed [by the word of God – Rhema], so that things which are seen were not made of things which do appear. (Hebrews 11:3) And for Logos “In the beginning was [the Word – Logos], and [the Word – Logos] was with God, and [the Word – Logos] was God. The same was in the beginning with God. All things were made by him; and without him was not any thing made that was made.” (John 1:1-3)

So what does the Word or Logos of God mean in the original Greek language? According to the Strong’s Concordance it means:

G3056. logos, log’-os; from G3004; something said (including the thought); by implication, a topic (subject of discourse), also reasoning (the mental faculty) or motive; by extension, a computation; specially, (with the article in John) the Divine Expression (i.e. Christ)

So we learn that God referred to his thoughts, plan, and reasoning in His mind as the Word of whom He is. Not three separate persons or individuals of one substance. God is a Spirit.

The importance of this explanation is to show you that God and the Word are not three separate persons or individuals of one substance. God is a Spirit. The Word was with God as the mind of God, the reasoning of God, and the plan or purpose of God. This is found in the very definition of the word Logos which is translated in our language as Word.

So when the Word became flesh we had the only begotten of the Father (John 1:14) “To wit, that God was in Christ, reconciling the world unto himself, not imputing their trespasses unto them; and hath committed unto us the word of reconciliation.” (2 Corinthians 5:19) “Behold, a virgin shall be with child, and shall bring forth a son, and they shall call his name Emmanuel, which being interpreted is, God with us.” (Matthew 1:23) The one and only God-man. Fully God and Fully man in a perfect union. This body of the God-man was to be called Jesus we are told for a reason. “And she shall bring forth a son, and thou shalt call his name JESUS: for he shall save his people from their sins.” (Matthew 1:21)

Since Jesus was both fully man and fully God when he spoke to the Eternal Spirit of God he was speaking as a man to God, for he himself was fully man and fully God. “Who in the days of his flesh, when he had offered up prayers and supplications with strong crying and tears unto him that was able to save him from death, and was heard in that he feared; Though he were a Son, yet learned he obedience by the things which he suffered;” (Hebrews 5:7-8) Jesus was leaving for us by example how we are to communicate with the Father of Creation. The problem people are running into is not understanding why Jesus would pray or speak to God if God wasn’t a separate person or individual of God. The reason is because he was also fully man. He hurt just like you and he suffered as we suffer and partook of our nature yet he was still God in the flesh or the Son of God. Not three separate persons or individuals of one substance. God is a Spirit. “For verily he took not on him the nature of angels; but he took on him the seed of Abraham. Wherefore in all things it behoved him to be made like unto his brethren, that he might be a merciful and faithful high priest in things pertaining to God, to make reconciliation for the sins of the people. For in that he himself hath suffered being tempted, he is able to succour [to aid or relieve] them that are tempted.” (Hebrews 2:16-18) “Seeing then that we have a great high priest, that is passed into the heavens, Jesus the Son of God, let us hold fast our profession. For we have not an high priest which cannot be touched with the feeling of our infirmities; but was in all points tempted like as we are, yet without sin.” (Hebrews 4:14-15)

Jesus at one point even tells the people they only heard a voice from Heaven for their own sake, meaning so that they would believe. “Father, glorify thy name. Then came there a voice from heaven, saying, I have both glorified it, and will glorify it again. The people therefore, that stood by, and heard it, said that it thundered: others said, An angel spake to him. Jesus answered and said, This voice came not because of me, but for your sakes.” (John 12:28-30)

The main reason there is so much trouble with understanding of why Jesus spoke or prayed to God his Father is because people fail to comprehend or grasp that Jesus was also a man just like you and I. So being fully man you are going to speak to God even though Jesus himself was God in the flesh. You must always take into account the dual nature of Christ.

Since Jesus was God in the flesh to say Jesus wasn’t human or was just a shell that the Spirit of God dwelt in is false because you take away the humanity of Christ of which come to die for our sins. “The next day John seeth Jesus coming unto him, and saith, Behold the Lamb of God, which taketh away the sin of the world.” (John 1:29) On the other hand even though we know Jesus is God to only say Jesus is God confuses people because they then try to figure out why then did He pray or talk to God and why was their a separate voice. The answer is because Jesus was both fully man and fully God.

This is why I believe that it is a misrepresentation that leads to confusion when Christians try to explain the Godhead as Father in Creation, Son in redemption, and Spirit in sanctification. This illustration shows a God of three in one to most people if not all. The wording should be more along the lines of our God is a Spirit and He is one. In regards to that which is created the Spirit is known as our Father by title. In regards to the Son of God the Spirit of God became incarnate to redeem mankind back unto Himself and He is still one and the selfsame Spirit. This terminology clearly states that God is one and how without giving the illusion of three in one.

Bible Questions or Bible Topics? Email: cpministries100@gmail.com No file attachments will be accepted or you can leave a comment to any post.

To download any of our free audio or written sermons or to listen to our free radio station be sure to visit us @ http://www.ensnaredindistractions.com/

6 thoughts on “The Dabar, The Logos, and The Rhema”

A city that is set on an hill cannot be hid.